Participation of the Moscow buddhist society in other projects 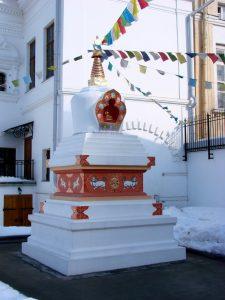 On June 18th 2007, an «Enlightenment Stupa» was opened at Nicholas Roerich Centre. The exhibit was dedicated to the eightieth anniversary of Roerich’s Central Asian expedition. The Enlightenment Stupa in the Museum has been built with the blessing of His Holiness Dudjom Sangye Pema Trulmingpy Shep Rinpoche – Head of Dudjom school. This first Buddhist Stupa of Enlightenment, currently founded in Moscow, serves as the center of worship and celebrations of Moscow Buddhists.

PARTICIPATION OF THE MOSCOW BUDDHIST SOCIETY IN PUBLISHING