The ceremonial opening of the Stupa was held in Moscow on September 16th, 2017 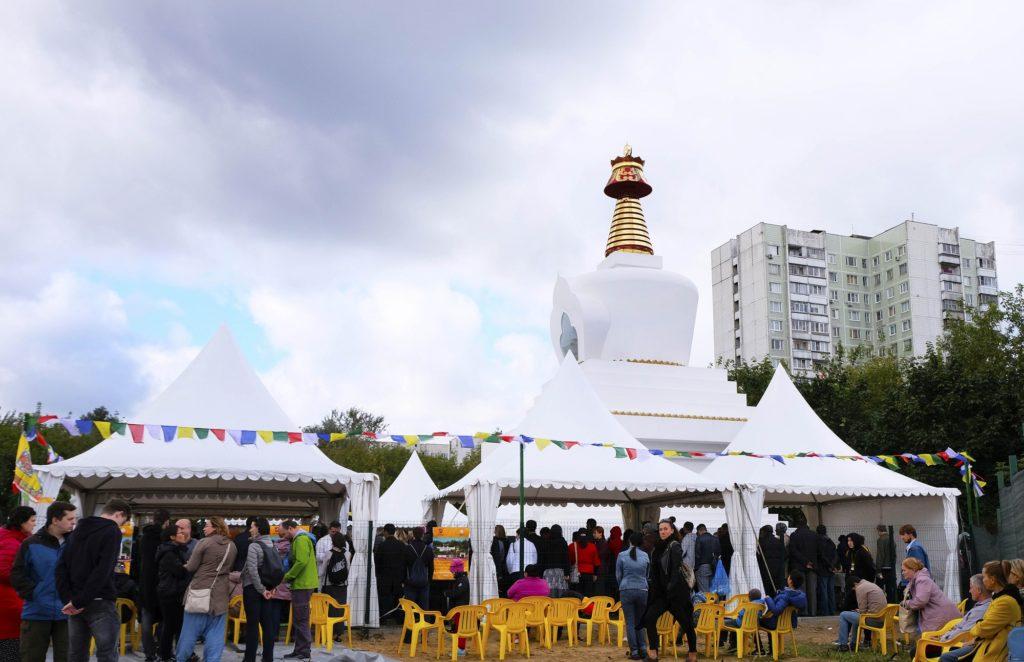 Post-event press release of the opening of the Stupa of Enlightenment
in Otradnoe, Moscow, the North-Eastern District, 16.09.2017.

The ceremonial opening of the first Buddhist Stupa of Enlightenment located in the territory of the future Buddhist Temple Complex “Tupden Shedubling – The Center for Studying and Practicing Buddha’s Teachings” in the Otradnoe sub-district of the North-Eastern Administrative District (SVAO) took place in Moscow on September 16, 2017.
At 10:30 a.m., Buddhist monks from Buryatia, Kalmykia, as well as from Thailand, Myanmar and Sri Lanka began a ritual service of the Stupa consecration. The service was led by Kundeling Tatsak Rinpoche XIII, the well-known Buddhist teacher, the Tibetan lama from India. Upon the end of the consecration, the monks headed by Kundeling Rinpoche practised the Kora – a three-time ritual circumambulation around the Stupa. The Kora was also joined by believers.

The dance ensemble “Buyan-khan” led by E. Buyantueva celebrated the official opening with a welcome dance.
The official opening ceremony of the Stupa of Enlightenment was started by the Chairman of the Moscow Buddhist Society D. Shagdarova. She said, “The Stupa is not only a Buddhist sacral structure, but also a beautiful architectural monument, the spiritual heritage of our city”, and a sacred power of the Stupa “is aimed at the formation of high morality and spiritual culture of parishioners, which will help many people to avoid the influence of various sects. Buddhism has always been a teaching of peace, friendship, it has brought together a variety of nations, it has been repeatedly recognized by international organizations as the most peaceful religion in the world”.

Buddhists were congratulated with welcome speeches delivered by:

The Chairman of the Moscow Buddhist Society expressed special gratitude to all those who took an active part in the construction of the Stupa of Enlightenment: the architect of the Buddhist Temple with a Stupa P.Tereshkin, Lama Tenzin Kelzang who was observing the compatibility of the content and order of the embedding of sacred objects in the Stupa with the Tibetan Buddhist canons, a representative of the construction design and survey company “Genplan” S.Akhremenko. In addition, special thanks were expressed to the sponsors of the construction of the Stupa of Enlightenment: O.Batskikh, S.Gladkikh, V.Dementiev, S.Dzhayamakha, K.Dzhimbinov, B.Zhamsuev, Z.Syamiullin, Zh.Toktokhoev, S.Filonov, G.Tsynguev.

The event was also attended by: Head of the Otradnoye sub-district of Moscow V.Litovsky, Deputy of the Moscow City Duma A.Paleev, representatives of the Russian Orthodox Church, representatives of the Religious Organization of Muslims “Yardyam”, representatives from Buryatia, Kalmykia, Tuva, the Altai Republic, the Oriental Museum. The event was also visited by: Mr. Do Nyunt Maung – the Second Secretary of the Embassy of Myanmar, Mr. Priyantha – Third Secretary of the Embassy of Sri Lanka, Mr. Raal Sotheara from the Cultural Center of Cambodia, Mr. Sammy Kotwani of the Indian Community, as well as representatives of the cultural center of India, Indian, Thai, Vietnamese expatriate communities. The opening of the first Buddhist Stupa of Enlightenment in Moscow was completed with a concert of singers from Buryatia and Kalmykia. The event was attended by more than 1,000 people.

The event was covered by almost all the mass media in Moscow, including Swiss SRF TV and Thai television.