Moscow Buddhist Society, a religious organization, has become an initiator for construction of the first Buddhist Temple in Moscow. The developed concept and architectural project of the Buddhist temple received the support of the Moscow Government, the Administration of the President of the Russian Federation, residents of the Otradnoye district, as well as State Duma deputy Iosif Davydovich Kobzon, who took an active part in the preparation and implementation of the project. The Buddhist temple is located in Otrada Park and is part of the temple complex of traditional religions of Russia. In November 2004, during the visit of His Holiness the Dalai Lama XIV to the Republic of Kalmykia, a delegation of Moscow Buddhist Society asked for a meeting with His Holiness to discuss the construction of the First Buddhist Temple in Moscow.

The Message from His Holiness the Dalai Lama XIV during discussions of the construction of the Buddhist temple in Moscow «I highly appreciate all your efforts. Even though Moscow is not a Buddhist region but as the Buddhism is one of the important religions in Russia, it would be logical to build one Buddhist Center or Temple in the capital of the Russian Federation. It would be correct. It is quite natural that the Temple, which will be visited by local Buddhist societies as well as people from other regions and countries who often visit Moscow, will be built in Moscow, the capital of Russia. That is why the construction of the Temple is a great deed! It’s wonderful that different Buddhist traditions – Theravada, Bothisattvayana, Mantrayana, Dzen – are joined together! It should be not only a Temple, but also an educational center. It should be something like an academic institute. In this case everyone will be able to visit it – Buddhist, Christian, Jewish or Moslem. Today, to create the harmony between different people it is essential to know each other’s traditions. It also concerns the Buddhists – it’s of the utmost importance for them to get this knowledge. We must learn. We need to learn.» 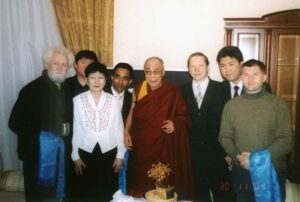 Moscow Buddhist Society has done a great job on developing and coordinating all design and permit documentation for the construction.

Venerable Kundeling Tatsak Jedun Rinpoche conducted the ritual of blessing the Earth for the construction of the Small Temple (the Auxiliary Building). Read more ...

Сoncept of the Buddhist temple in Moscow

want to help
The construction of the Temple is carried out exclusively at the expense of donations of not indifferent people.