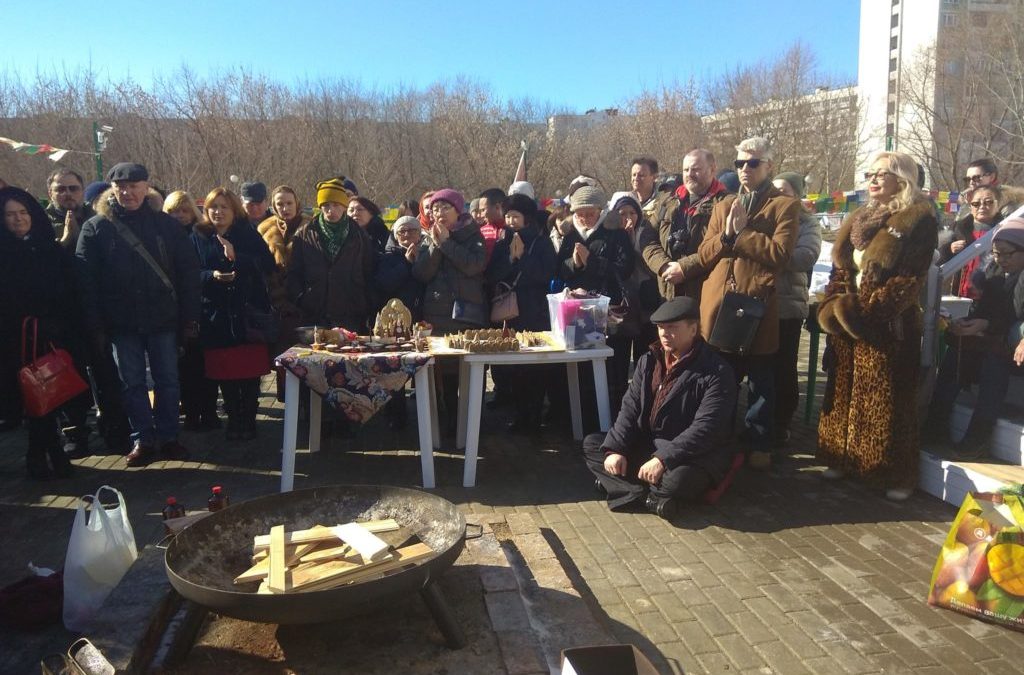 On March 24th and 25th, an official delegation of monks from Drepung Gomang Monastery, who arrived in Russia at the invitation of Drepung Gomang Center Foundation, served the ceremony near the Stupa of Enlightenment. 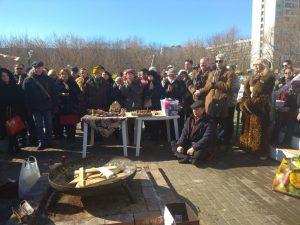 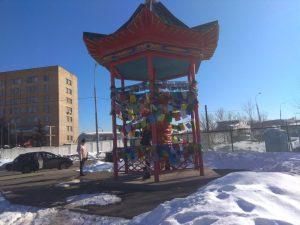 See our page in Facebook to learn more about scheduled events (Russian only).

On March 24th, the ceremonies of Gyabshi and Yanguk were held.

Gyabshi is one of the most widespread and effective Buddhist rituals. During this ceremony, 400 gifts are donated: 100 lamps, 100 food offerings – Tormas, 100 Tormas in the form of human figures (Lud-Torma), made from dough and 100 tsa-tsas to eliminate the darkness of ignorance, the victory over passions, illnesses and early death. All these gifts serve as a kind of the “redemption” of all beings from the captivity of the four Maras and their servants. All these obscurant, harmful forces are invited with compassion; they are asked to accept offerings and called to activities for the benefit of all beings. Gyabshi is usually held in very serious cases, such as severe diseases, the emergence of conditions that are life-threatening, major financial or legal problems, physical threats, a negative impact of celestial bodies and other unfavorable circumstances.

Yanguk is the ritual of “attracting” wealth which accumulates the energy of all Awakened to eliminate obstacles in the acquisition, preservation and enhancement of material and spiritual wealth. Participation in the ritual contributes to the growth of conditions enabling to get rid of any hardships, whether it is the need for wealth, friends and helpers, and most importantly, to avoid the lack of spiritual actualization for the benefit of others. For the offering, some “white” gifts are usually donated, such as milk, fruit, nuts, candies in gold wrappings, round cookies, juices, etc.

Lutor is a special ritual of offering the Torma to the Nagas, ghost-landlords of the Water. Buddhists believe that the world of conscious beings is not limited to those whom we can see, i.e. humans and animals. Apart from them, there are different kinds of deities and ghosts among our neighbours on this Earth; and although we cannot interact directly with them, our activities have an impact both on them and on their environment. In addition, they can also affect many spheres of our life. In the Buddhist scriptures, the Nagas are usually treated as creatures of the animal world, i. e. they are ordinary Samsaric beings prone to Kleshas. The Nagas and Sabdakies (the ghost-landlords of the Earth) consider themselves the true masters of those places that they inhabit; and if we, being irrational or careless, pollute their “home” – rivers and lakes, break down their trees, litter the banks of reservoirs and forests,

they become displeased. As a result of the men’s negative influence on the environment, the Nagas get sick and angry, in which case they are able “to send” diseases to people and livestock. In addition, the Nagas are considered to be “weather managers” – their discontent leads to droughts and natural calamities. The ceremonies of offering to the Nagas are served on the days of their coming out to the land surface. On such days, they are prone to accept gifts consisting of specially prepared Torma, milk and Lumen, a medicine that helps to cure their diseases.